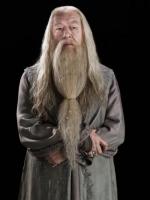 O.M. (First Class), Grand Sorc., D. Wiz., X.J. (sorc.), S. of Mag.Q. (c. Summer 1881 – 30 June, 1997) was the Transfiguration Professor, and later Headmaster of Hogwarts School of Witchcraft and Wizardry. Professor Dumbledore also served as Supreme Mugwump of the International Confederation of Wizards (?–1995) and Chief Warlock of the Wizengamot (?-1995; 1996-1997). He was a half-blood, Muggle-supporting wizard, the son of Percival and Kendra Dumbledore, and the elder brother of Aberforth and Ariana. His father died in Azkaban when Dumbledore was young, while his mother and sister were later accidentally killed. His early losses greatly affected him early on, even at his death, but in turn made him a better person.

While initially unable to directly act against Gellert Grindelwald, due to their past Blood pact, the Ministry's surveillance of him, his lingering feelings of love toward Grindelwald, and his lingering guilt over Ariana's death, Dumbledore sent Newt Scamander to New York to release the Thunderbird Frank, and later sent Newt to Paris to rescue Credence Barebone. After the tragic death of Leta Lestrange in Paris, Dumbledore became determined to contribute helpful advice to the resistance against Grindelwald, notably Newt, Theseus, Tina, Jacob, Yusuf, and Nagini in the Global Wizarding War. Initially unbeknownst to Dumbledore however, Grindelwald intended to use the former's alleged Obscurial relative, Aurelius Dumbledore, as a weapon against him.

Following the Global Wizarding War, and end of the For the Greater Good revolution, Dumbledore became most famous for his defeat of Gellert Grindelwald, the discovery of the twelve uses of dragon's blood, and his work on alchemy with Nicolas Flamel.

It was through Dumbledore that resistance to the rise of Lord Voldemort was formed, as it was he who founded and lead the Order of the Phoenix against Voldemort for 11 years in the First Wizarding War. Following Voldemort's sudden return and the start of the Second Wizarding War after the resignation of Cornelius Fudge, Dumbledore swiftly formed and lead the second Order of the Phoenix. He would also support Jacob's sibling in the latter's Cursed Vaults quest, as well as later consistently supporting the trio of Harry, Ron, and Hermione during their first six years at Hogwarts, and they would thus name Dumbledore's Army after him.

Due to the fact that he had a keen mind and legendary power, Dumbledore became the only wizard that Voldemort ever feared. He was the wielder and the master of the Elder Wand from 1945 until 1997 and considered by many as the greatest Hogwarts Headmaster. As he was about to die by a cursed ring, Dumbledore planned his own death with Severus Snape. Per the plan, Dumbledore was killed by Snape during the Battle of the Astronomy Tower.

Though he was no longer alive at the time, it was through Dumbledore's manipulations that Lord Voldemort was ultimately defeated and lasting peace finally restored to the wizarding world. Dumbledore is the only Headmaster that was laid to rest at Hogwarts. Albus Dumbledore's portrait still remains at Hogwarts. Harry Potter later named his second son Albus Severus Potter after him.

·  Change how to obtain "Toy cat" Written for Hartje

Hmm, it seems like I don't have any ToB rewards.