3 replies to this topic

Random thread. Some shower thoughts, wanted to post in one of the places that shaped the journey. This thread probably not relevant to you if you don't know me, so feel free to close out of it.

Been on a crazy ride my whole life, been privilaged enough to live in multiple countries; growing up and experiencing, encorportating, learning about new cultures - while also being exposed to a whole new medium that we take for granted, the Internet. All these things come together and shape the person who you are.

Alora, got quite a couple of years under its belt. Congrats @Omicron. Knew we were building something special when we first set out. We've both changed, and grown over the years. I still remember the days we were sitting on Skype transforming the little server known as Impact to what this became. Looking back, it's quite an achievement. We went from playing a small scale server with 10 active players, to a server that's still around for multiple years and has a playercount that has consistently been over the multiple houndres.

The days sitting on Skype, together with a couple of other members [uTorrent, Ikta, Drake] - those were wild times. I remember us testing hours on end to get what would then be Alora. Stripping the game down to its bare bones, and transitioning to the OSRS meta that we see dominates the scene today. We went from getting an update every 3 months to weekly ones at launch and even to this day I see you jam packing updates on a consistent basis. I still remember the day I came up with the name Alora, recalling that it was some city in Spain and suddenly wondering if that would cause conflict with the SEO indexing - looks like it's the first result now and has been for a while.

Great times. Then once we launched, I still remember stressing out about how I was going to put the team together and make all this function. I was ectatic, yet stressed. I still remember finally deciding to go out properly after the first two weeks of launch, and while I was out intoxicated out of my mind - I get the ping "The server crashed"; back when crashes were still a thing and someone had to reboot the server to ensure everything continued running. What a trip.

Managing all of that, thought me a bunch of lessons along the way - and for those I am forever greatful. Want to shout out all the team members who were part of the journey - no matter how short it was. Very thankful for all the work everyone did, especially people like Ikta, Haris, uTorrent, and countless of others who helped shape the team along the way. We all make mistakes, and I had my fair share of those too. The decisions made while I was in that burnout phase while dealing with another personal aspect of my life lead me down a self-destructing path in terms of my Alora career. That said, we all make mistakes - we're only human after all and sometimes its easy to get blinded by some things; some easier than others. That said, I learned life lessons that I'll never forget and those were critical for making me who I am today. Experienced heartbreak, and lost the clostest friends I had at the same time - and yet the best of friends are always able to forgive, and that's what you guys did.

Thanks for sticking by me over all these years, and allowing me to vent to you, learn from you, and just chill along the way.

Anyways with that out of the way, I want to take a moment to shout out the PWJ friendgroup. Majority of ex-players that came together and chilled over the 2.5 years. Very thankful for every member in there, you guys are forever part of the people I will respect! Endless of moments of discussions in there, always trying to help each other out - while continuing to degen around. Our internal leaderboard for the curious. 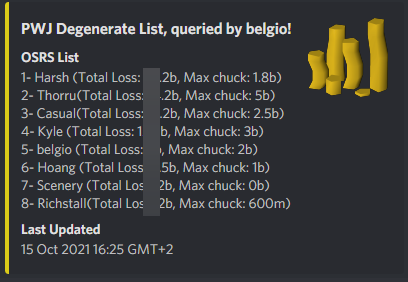 Anyways, could type some more but seems like this thread is already becoming more than what I initially anticipated.

Wanted to take a bit of time to thank all the people that were part of the journey, and somehow this felt like the perfect time to post something like this. The community, Alora itself, and the work I put in has given me a bunch of life lessons that I continue to leverage in my life. I would not have been so successful without any of this happening. Wishing everyone the best, find what drives you and act on it.


TLDR; Just a thread looking back at the journey I had. Thank you to everyone I met along the way, especially to the legends chilling in PWJ.

Hey @Blank, Those are some wholesome and very humble words. I started Alora sometime in 2017 on my original account and remember seeing you as an admin. You were always a pretty well collected person, and seemed to do what's best for the server at the time. uTorrent is actually one of my favorite people I've ever encountered on Alora, I wish I could still interact with that guy currently.

It seems like you've had a huge impact in getting Alora some traction and helping it start to grow as a community and a whole, Into eventually what it has become today. I've taken breaks multiple times, and I always find myself back here one way or the other. Maybe because of how grindy it is, or maybe it's the community.

You know, I barely know you but I still hope you're staying healthy and doing good for yourself in life. I hope you can still stick around and pop up here and there along the way. It's good to see old players still surfacing on forums ETC. I hope whatever you decide to do whether you stick around or not, leads you to great happiness and success. However I didn't regret reading this one bit, and It makes my soul feel good to see such wholesome content.

Reading this brings back some great memories, feels like ages ago that we were messing around on a server with just 10 players. Undoubtedly, you helped shape the direction that Alora took, along with everyone else you mentioned that was part of the early team and testers. I still remember asking for ideas for a server name, and for some reason when you suggested Alora I immediately thought “that’s the one.”

Even though our paths have all diverted, I’m glad that we all share this part of our history. We’ve learned a whole lot on this journey, and I’m proud of the growth and progress you’ve made along the way.


This topic has been visited by 56 user(s)